The London Welsh Womens’ team kicked off their season with a friendly against Streatham and Croydon on the AGP at Chiswick. 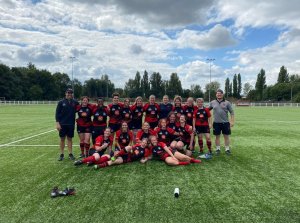 The start of the game was marked by a minutes silence in honour of Her Majesty Queen Elizabeth II.

These teams met last season at ODP just after the new year. A strong Streatham performance saw them take the spoils 5-32. Saturday saw a reduced Welsh team due to injuries and Weddings which lead to several players playing out of their favoured positions

Streatham kicked off, after a few phases where welsh made good ground Streatham turned the ball over and quickly shipped it wide to score. The try was converted.

Welsh, determined to do better, chased the restart and ensured that Their tackles were made and the line set firm. Where line breaks came they were met with bone crunching tackles from Cassie Beynon. Welsh held out wave after wave of Streatham attacks including a fantastic cover tackle from Welsh scrum Half Ruth Barton much to the delight of the watching supporters.  But finally they broke through the welsh defence and scored.

Welsh started to build into the game and got some great attacking ball. There were some fantastic ball carries by the forwards with some stoning runs by Serena Bailey and Nat Smith. And also the backs getting involved and trying out some of their set moves. Welsh drove up the pitch into the Streatham 22. The call from Scrum Half Ruth Barton came to pick and go which finally led to Flanker Paula Cooper breaking through the defence at the side of the break down from 5 metres out and scoring.

The second half saw a bit of a shuffle round of the team with Lily O’Hara, who’d been playing on the wing, taking over the reigns at 9 partnering with Jemima Venning. Both did a fantastic job of controlling the play in the second half. We also saw the slightly unlikely back row partnership of Ruth and Coops.

Never the less Welsh stuck to task – the set pieces working well. Lou Norris was a menace In the air at line-outs. stealing opposition ball and winning her own.  This led to Welsh second try, a well worked catch and drive off the line out leading to a score from Number 8 Nat Smith.

Streatham made good use of their extended squad brining on fresh legs. Welsh tried their best to close the door with some fantastic defensive efforts out wide from Rhiannon Morgan and Charlotte Berbers but despite their best efforts Streatham managed to score another brace of tries.

Headed into the final 10 mins Welsh were still fighting. Strong runs from Bianca Sainty in the centre and Alice Gaynor making a complete nuisance of herself at opposition rucks meant Streatham never got an east moment. A brilliant turn over by Rhiannon Owen set Cassie Beynon off on a snaking run up the pitch beating multiple defenders before offloading to supporting runners whose quick hands got the ball to Prop Alice Gayner who crashed over to score what could be a contender for try of the season!  The try was converted by Cassie Beynon

The final whistle came and the game ended 33-17