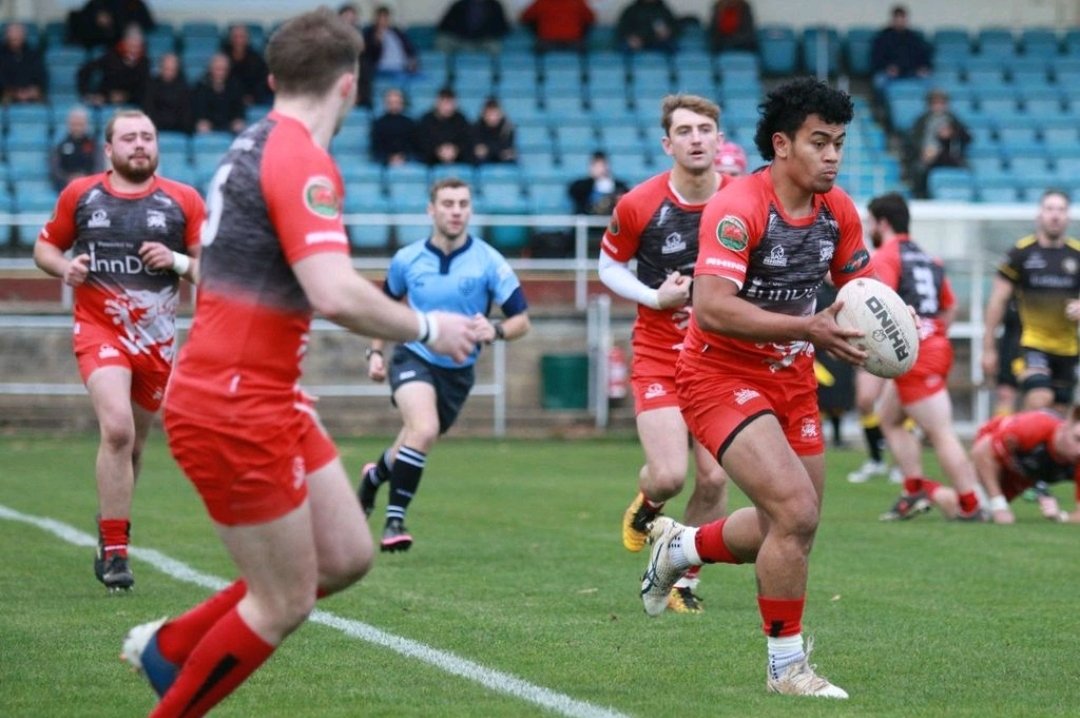 London Welsh got back to winning ways with a 29-22 over Bournemouth at Old Deer Park last weekend. A bonus point win completes the half way poinot in the season and consolidates 8th place in the table. Depending upon results in Round 12 next weekend, Welsh could jump to 6th and be looking at the action zone closer to the top of the league.

As has become somewhat of a theme this season….Welsh were short of a whole host of first XV regulars through injury; it was noted by many of the LW faithful that there appeared to be more players on the side lines at Kick Off, that there were on the pitch! The injuries also compounded by the suspension of 1st xV fly half Daf Manley until 17 December, and the international call up for Sion Cowdy to the Irish 7s squad. That said an opportunity was given to a number of the Druids 2nd XV squad, one which they were very much looking to take!

It was the visitors who got off to the better start, scoring a penalty two minutes into the contest, and five minutes later, had an opportunity to score the first try of the game, but their winger knocked the ball on just before scoring under good last ditch pressure from Osian McAvoy.

Welsh had the chance to take the lead ten minutes into the contest with winger Jacob Butler dotting the ball down. However, the referee deemed there to be a forward pass in the build-up and the try was chalked off.

it was all Welsh from the 10 minute point until half time, the back line looking dangerous as they have all season and supported by a solid forward foundation.

The pressure told on Bournemouth by way of penalty count and on 13 minutes the visitors went down to 14 men after flanker Ciaran Smyth tackled Osian McAvoy off the ball in the build-up to a counterattack.

A minute later, London Welsh took full advantage of their extra man and scored their first try of the afternoon through Jacob Butler, who wasn’t to be denied on a second occasion!

The esulting yellow card penalty, the Exiles kicked to the corner, and from there patiently made their way towards the try line. Eventually, an overlap was created, and Adam Nixon laid the ball off to the winger who scored in the corner. McAvoy’s extras made it 7-3.

On 18 minutes, Welsh got their second through Griff Whitson after another assist from Adam Nixon who made a superb scrum half’s break away on the halfway line before offloading to the flanker who scored near the posts. The break from the base was one of many from Nixon on the day who looked unplayable at times as he controlled the game from 9; the pace of Whitson at 6 to keep the support line is testimony to his all round ability. Another conversion from McAvoy meant that the Exiles lead was starting to grow- 14:3.

Debutant Morgan Churchill on the wing added his name to the history books of London Welsh try scorers five minutes later. After breaking a tackle and out pacing the full back, the big and powerful 11 proved that he was ready to step up from the Druids to 1st XV action, he scored in the corner. A missed conversion made it 19-3 after 27 minutes.

Two minutes before the break Bournemouth scored their first try from a rolling maul- their strongest asset on the day amd a weapon they seemed to revert to at every opportunity. Their front 5 were a big unit and they played to their strengths. The score was not converted and Welsh led 19-8 just before the half.

However, Welsh were not done before the break and responded quickly to score a penalty from Osian McAvoy who slotted from 35m out to make the half time score 19-8.

The second half was a cagey affair as the weather worsened with the wind noteably picking up; Bournemouth having most of the pressure in the first 10 minutes and forcing Welsh back into their 22.

Ten minutes into the second half, Welsh were shown a yellow card of their own after the excellent London Welsh Samoan Lima Savaiinaea was penalised for hands in the ruck (backs getting caught in the engine room!).

Bournemouth’s persistent pressure was beginning to cause problems and the extra man advantage meant that Welsh were struggling to get out of their half.

it was during the 50-70 minute period that Welsh showed their grit and resolve. Of the 11 games in the first half of the season Welsh have been winning 9 of them at half time (!), a statistic that is not lost on the coaching team. The superb defence shown during this period is a clear indication that the work has been done on not surrendering games from a commanding position.

Despite the yellow and consistant pressure Bournemouth could not cross the Welsh line until four minutes before the end of the game. Bournemouth scored their second try on 76 minutes, again through a rolling maul off an attacking lineout. The conversion added, people in the crowd were starting to get nervous despite Welsh being in a commanding position for most of the game. It was now somehow a 7 point game with 4 minutes remaining.

The pressure didn’t faze London Welsh however, as they immediately won a penalty from the restart and marched down the pitch. A series of scrum penalties in the Bournemouth 22 gave Welsh the platform for Osian McAvoy to nearly cross and for excellent powerful running from both Ben Bodinham and Charlie Bramble. It was crowd favourite big Andy Black who finally crossed, crashing over from 5m out and snatching the bonus point try- Blacky very much looking back to his best now that he has found his feet in the league.

McAvoy added the conversion with a very good kick to make the score 29-15 in injury time.

Yhe gane was not over though! Full credit to a good Bournemouth side they were losing bonus point hunting and in the final action of the match, Bournemouth got a consolation try. Again, a penalty to attacking line to driving maul was the build up play and they crossed for their 3rd which gave them a losing bonus point thanks to the conversion making the final score 29-22.

This was an impressive performance from Welsh who were missing 10 first XV players and handed 3 1st xV debuts on the day. There were stand out performances from Charlie Bramble, Ben Bodinham, Sam Johnson and Griff Whitson. As ever Lima savaiinaea proved a real handful. Player of the Match was a close call with Osian McAvoy playing superbly at 10. However, on his return to the side, the applause goes to Jacob Butler. The diminutive winger scored one on the day but was a constant threat, at times he was mesmerising and the opposition could not handle him. It is great to see Jacob playing so well and enjoying his time on the field after what has been a difficult year from him and the family personally. That is Jacobs first PoM of the season as he notched his 4th try in only 5 games. Jacob was presented with his Devils Bridge Welsh Spiced rum by Club Chairman Danny Griffiths.

Next up for Welsh will be 12th placed Royal Wooton Bassett, who visit Old Deer Park next weekend. The 3rd of December will be a big club weekend as we enter the festive period and as the Exiles look to break into the top half of the league. There will be a host of returning players for Round 12 that will make competition for places very interesting.

Those wishing to book in to the pre match lunch and entertainment next weekend can do so via the link https://www.londonwelshrfc.com/events-list/

Player of the Match: Jacob Butler 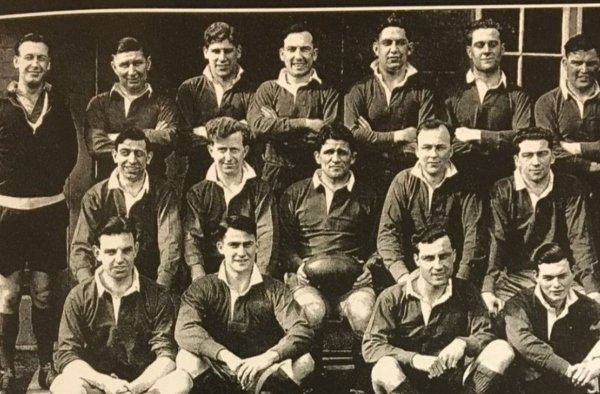 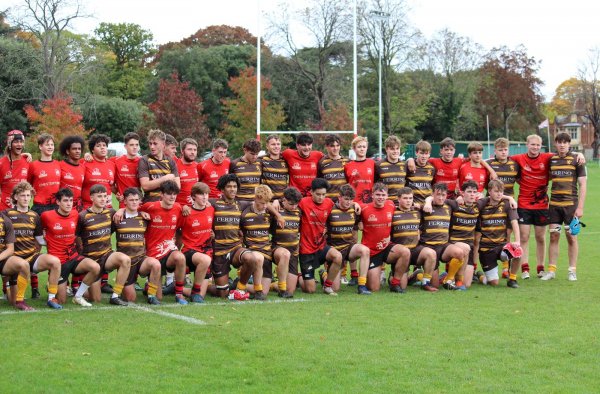