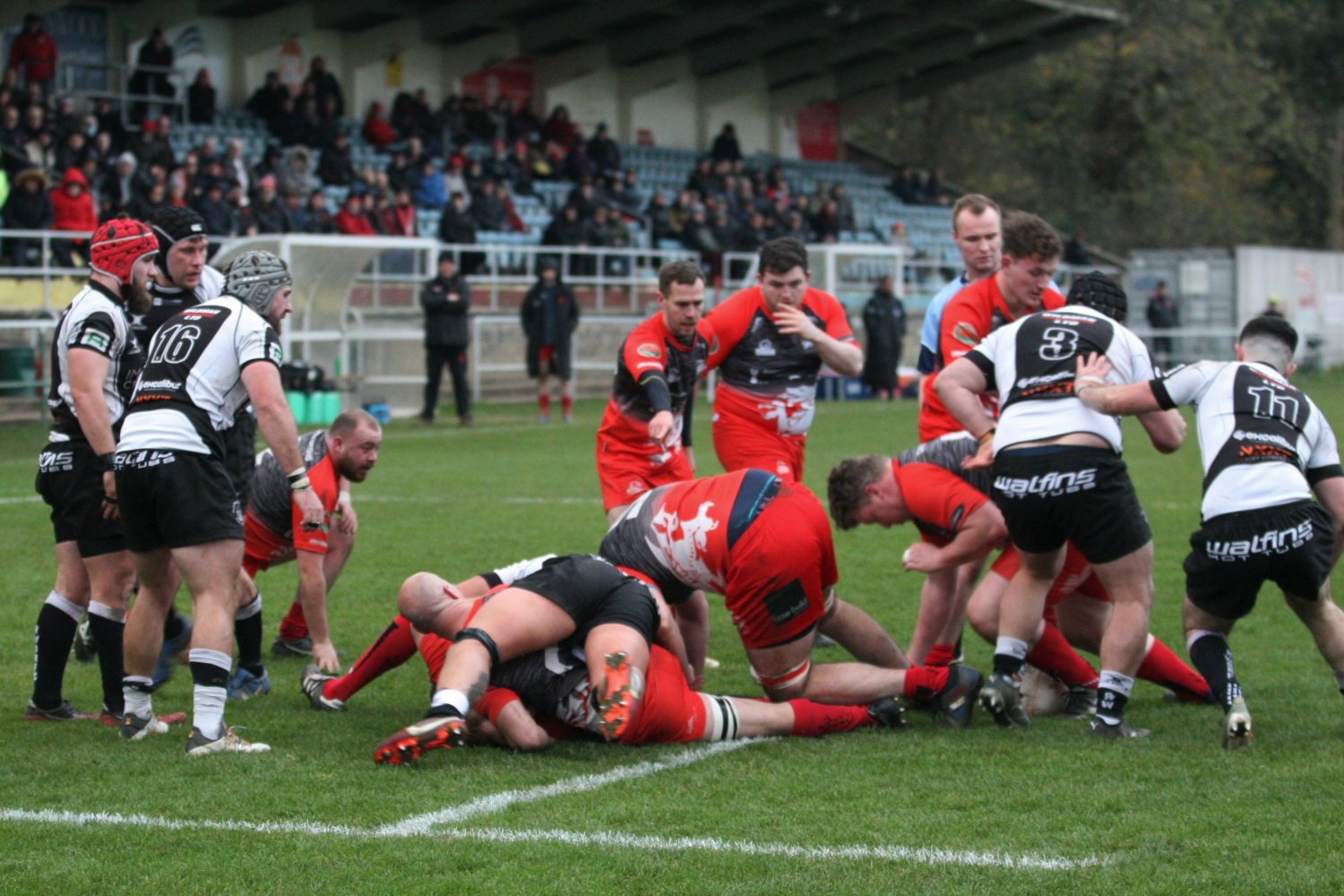 London Welsh made it two bonus point wins in a row with a 33-10 Round 12 victory over Royal Wootton Bassett at Old Deer Park, which sees the Exiles move up to sixth in the table.

Welsh’s bonus point victory against Bournemouth the previous weekend had given the Exiles momentum going into today’s game, against a Royal Wootton Bassett side thst sit bottom of the Regional 1 South Central table and are now nine points adrift of safety.

Welsh went into the clash with what has become a theme for this season – extensive injury problems! No less than 10 regular squad members either injured, suspended or on international duty (Dubai 7s). Despite the squad being very ‘bare boned’, we were able to welcome back aussie back row star Rohan Pixley.

Welsh started in dominant mood and were camped in the RWB 3rd for much of the first 25 minutes.

Two early chances for the home side were well defended though by the visitors and a frustating away trip back in round 2 (September) will have crept into Welsh minds. The outlook was further mellowed when on 10 minutes Kiwi abrasive Centre Tololima Savaiinaea was forced off the field with what has now been confirmed as a dislocated shoulder ( A further player that will now play no further part in the 22/23 season!).

It was the Exiles who broke the deadlock though, in the 13th minute with a try from Sam Johnson. An attacking grubber kick from midfield caught out the full back and led to Morgan Churchill kicking it again into the in-goal area. Four Welsh players chased after the ball, but it was the prop who dived on it to open the scoring showing great pace for a tight head! Osian McAvoy missed the conversion but Welsh did have the lead that their early dominance deserved.

However, RWB were not in the mood to look a potential gift horse in the proverbial mouth! Nine minutes before the interval, Royal Wootton Bassett took the lead with a converted try as they caught the home side cold. The visitors best asset during the game was the kick to the corner and skill in the loose, this led to their opening score. Welsh 7- 5 behind with the clock in the Red for the half.

A dreadful first half was not finsihed yet though ! London Welsh went down to 13 men after both Ewan Gully and Andy Black were shown a yellow card within mere minutes of each other. Both pinged for high tackles. Welsh did brilliantly to see out the half significantly hampered!

On the stroke of half time, the visitors extended their lead with a penalty, to make the score at the break 5-10. Welsh in some danger at this point with a RWB sniffing a chance whilst Welsh were 2 men down, a situation that would last for 8 of the second half minutes.

It was clear that some rather stern words were had with Head of Mens Rugby Cai griffths during the break! The Exiles started the second half much the better of the two sides despite the two man disadvantage. Concerted pressure up to 45 minutes when Gully returned to the field led to a Welsh penalty which McAvoy slotted from 35m out. Andy Black returned 3 minutes later and Welsh duly retook the lead, with another two penalties (this time in front of the posts and latterly from the 15m line on the angle) making it 14-10 and taking McAvoy’s tally to 9 for the day. Welsh were now in charge having had a rocket at the half and with a full accompaniment of players.

Welsh dominance reasserted, yet Welsh still could not break down the visitors in the final 3rd and in the cold weather. Welsh certainly missed a strike runner in the backline with Savaiinaea off the pitch and a the backline geared more to flare with the injury list taking out our ball carrying backs.

On 62 minutes a further squeeky bum time ensued as yet another Welsh player received a yellow card, this time for Griff Whitson, bringing up the 3rd Welsh card of the day. This was the key period of the game, Welsh had been well in control but like many games this season had not put the opposition to bed by the business end of the match.

However, this is a differnet Welsh side now from the early rounds of the season. Welsh have found their feet in the league and after 4 previous seasons of matches that had largely been over by the half, Welsh have now adapted to the reality of a much more testing league. RWB had opportunities in this period to take the lead but Welsh could not be moved in their own half and excellent defence frustrated the visitors until on 68 minutes they received a yellow card of their own. Griff Whitson returned to the field 2 minutes later.

Thanks to the one-man advantage, Welsh really excelled in the closing minutes. Knowing that a bonus point win would have been no less than expected before kick off.

Welsh scored three tries in the closing 8 minutes with two being from Morgan Churchill and taking his tally to 3 in 2 games since making his debut last weekend. Churchill had some significant work to do to finish both, the pick being a quick tap and go from Adam Nixon at 9, who then put an excellent weighted kick through for Churchill to chase. Chase he did, tipping the ball with his finger tips to save it from going out of play and fending the cover tackling full back. McAvoy converted the second of the two for a 26-10 lead and 1 minute on the clock. The game was of course won at this point but Welsh showed tremendous attacking prowess from the restart.

Big Andy Black showed great speed, fitness and strength in a typical barnstorming run having taken the kick off. RWB infringed on the ground and Welsh had a penalty on half way with the clock in the Red.

McAvoy took on the kick to the corner and brilliantly hit the 5m line for one last attacking line.

The line out was clean and the rolling maul was set; joined by all 7 of the Welsh backline! The maul proved only stoppable by illegal means and the referee walked under the posts – penalty try and no conversion needed. Welsh took their bonus point in the last play of the game 33-10.

Despite a very dominant display and convincing score, that does not give credit to RWB who were very difficult to break down and played to the death (were in it until 68 minutes!). It’s testimony to RWB that despite their league position, it can be seen from their results that they are seldom beaten by too much of a points difference.

All told this was a good win for Welsh as momentum builds and they enter the top half of the league for the first time this season.

There were some excellent displays in the cold conditions, Griff Whitson was very close to the player of the Match and was almost unplayable in defence at times. Sam Johnson in the engine room was sublime once again, as was McAvoy orchestrating matters from 10. However, in a game where the lineout and scrum were so on top (7 scrum penalties to Welsh!) And only one lineout going astray, the player of the Match went to the faultless Gareth Lewis at hooker.

Welsh travel to Oxford next weekend in Round 13, with not too distant memories of trips to the Kazam. It is hoped that a number of players will be returning for that one, although the loss of Savaiinaea will be a concern. Keep your eyes peeled for this week’s match preview for further details.

PLAYER OF THE MATCH: GARETH LEWIS 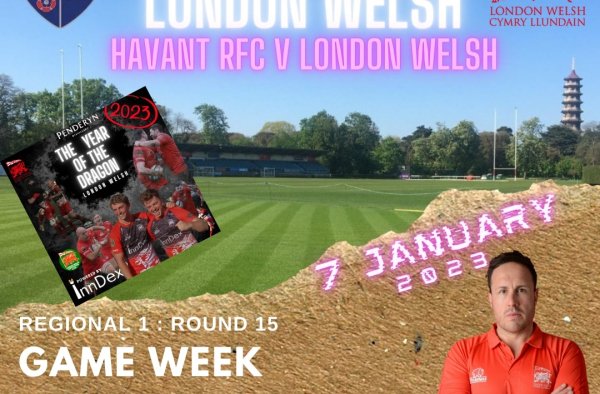 Happy New Year and all of those good things! Welsh are straight back into action this weekend with a… 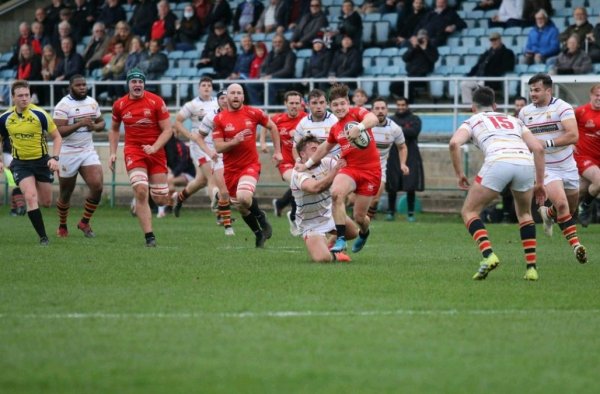