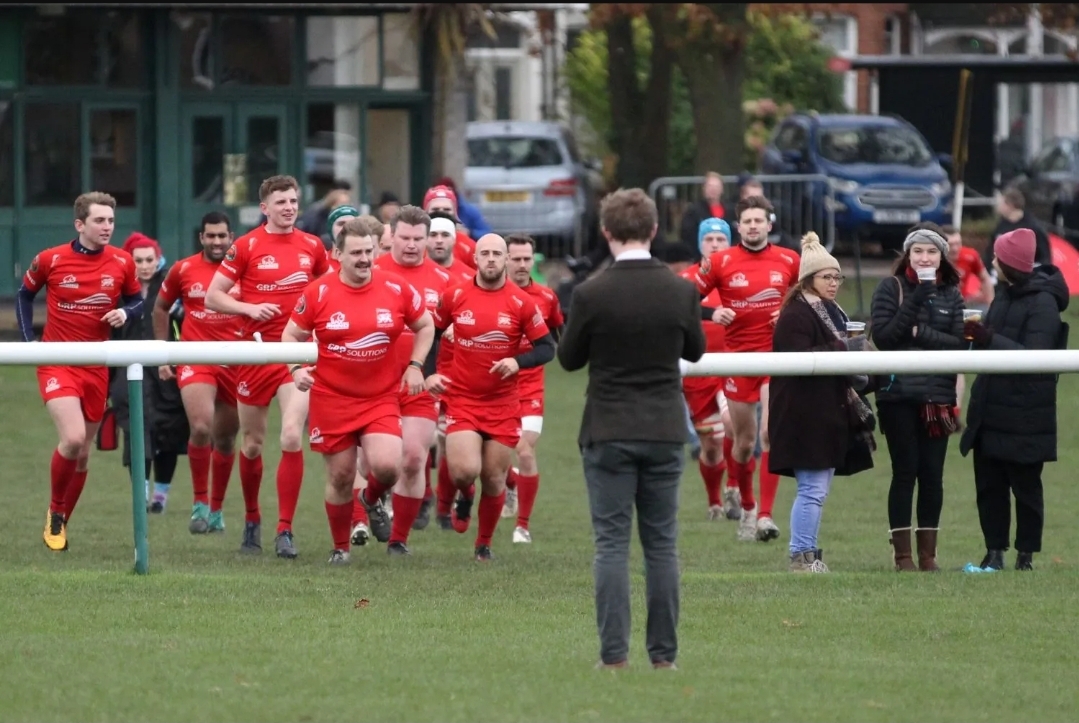 Match report: London Welsh make it 10 from 10 against Farnham in Round 11

A wet and blustery ODP greeted Farnham in front of a depleted crowd of 347; numbers heavily impacted by the weather and the cancellation of public transport.
It is fair to say that this fixture also heralded by far the coldest and most challenging playing environment of the season so far. A bitterly cold day with a swirling and driving wind made conditions very difficult for both sides (and those brave supporters that have dared to take on the elements!). The conditions naturally took a toll on some of the quality in play and this was evident in the first half.
The Farnham faithful arrived at ODP with memories of a 2019 upset when Farnham toppled Welsh in a cup match; it was clear during the pre match lunch that Farnham hopes were high.

Welsh welcomed Welsh u20 International Rhys Howells back to action following injury and Jacob Butler also returned from injury to make his home debut at ODP. Welsh had lost stalwart Tom Baldwin the night before KO to a positive Covid 19 test. However, this provided an opportunity for new signing 6’8 giant Ed Couzens; Ed joining this week from Llanelli RFC in the Welsh Premiership. Welsh had also tinkered with the now relatively settled side as Osian McAvoy moved to 10 with Lloyd Davies taking a seat on the bench. The match also heralded the return of front rower and BUCS Super Rugby Winner Griff Whitson from injury, who also took a seat on the bench. The match came too early for some major performance squad members as former Premiership man Ben West, stand in Captain Tom Williams, 1st XV regular Captain Chris Lilly, Welsh 7s International Luke Crocker and Hooker Jack Burnett all missed out through injury. Matt Pollen (arguably the stand out back of the season so far) was also unavailable for the match. Despite the missing players Welsh were again very strong for this round 11 match.

Come kick off time Farnham did not disappoint in their pre match optimism. Despite early pressure from Welsh, handling in the bitter cold proved difficult as many chances went begging due to poor execution.

Farnham were first to put some phases together and on 23 minutes with the scores still at 0-0 they opened their account with Gabe Hills diving over in the corner following a decisive counter attack. The conversion was missed in the wind and Farnham led 5-0.

However, Welsh still looked dominant in set piece and open play and were not phased by going behind. Welsh were camped in the Farnham 22 for large periods in the first half but their lineout suffered in the strong deceptive wind and several key attacking lineouts could not be landed; each relieving the pressure for Farnham.
As Welsh grew in to the game the pressure started to tell: on 28 minites the visitors were down to fourteen men after their full back was shown a yellow card for a deliberate knock on just as flying Winger Tom Hunt looked to be clear to the line.
Shortly afterwards on the half hour mark, Welsh got their first try of the match through debutant, and man of the match, Jacob Butler. Deep in their 22, a Farnham clearance found Butler on the ten metre mark. Butler steamed into the swirling high ball and hit an exceptional line taking the ball cleanly out of the air despite the conditions. The work was all done in the take and the line that had been hit, this simply left a canter in from 30m out. This truly was an exceptional finish from Butler. Osian McAvoy added the conversion to give Welsh the lead at 7-5 with 10 minutes left in the first half.

With Farnham back up to 15 men Welsh now had the bit between their teeth and had warmed up the hands! On the brink of half time, the Exiles scored their second try of the match through Tom Hunt. A quick tapped penalty on the half way line led to a break away into Farnham’s 22 and some excellent running for a big man from second row Will Ponty. After a series of phases, the ball was spread out wide for Tom who scored in the corner. Tom had plenty to do still in having the last defender to round and the cover defence to outpace. This score took Tom to joint top try scorer for the season with 5 tries (now shared by three players- Hunt, Sion Cowdy and Paolo Peschisolido). With the conversion added, Welsh had a half time lead of 14-5.

Welsh began the second half in the same manner that they had ended the first, scoring a try just minutes into the second half through captain James Buncle. It was clear that strong words had been had with Director of Rugby Cai Griffiths at the half. After winning a penalty and going for touch. The Welsh maul was simply too much for the opposition, and led to the big Norwegian International crashing over; the score also brought up Welsh’s 50th try of the 21/22 season. With the conversion missed, Welsh had a fourteen point lead at 19-5.

The visitors responded quickly though and on 50 minutes mustered their second try, through winger Sam Thomas who scored in the corner. A momentary lapse in the Welsh front line defence had parted the waves around the fringes and on the back foot Welsh were then out numbered out wide. The conversion was missed to make it 22-10. This proved a frustrating score as

Welsh were on top of the game at this stage and although comfortable could not seem to break the Farnham determination.

Welsh stuck to the task though and increasing dominance in possession led to the bonus point try shortly afterwards. On the 60 minute mark a quick line out led to a good carry from Osian McAvoy who had switched from outside half to fullback. After a few phases, the ball found flanker Rohan Pixley who carried well and fell just short of the try line. Pixley proved a severe threat throughout the game and as has been the case for the last couple of seasons, his ability to break the line and evade would be tacklers, gave Welsh excellent advantage. The score actually came from Rhys Howells in the centre after he reacted quickest and picked up the ball from Pixley to power through the last defenders and dive over the line. This score was Rhys’s 28th league score for Welsh, a land mark that took him to 4th in the all time London Welsh try scorering record charts. Rather fittingly the main guest for the pre match lunch was former Welsh favourite and England International Paul Sampson, who leads the all time Welsh try scoring charts with 44. He looked on as Rhys crossed the line. The conversion was missed to make the score 27-10.

Five minutes before full time, the home side scored their fifth, and final try of the contest. From a penalty won by Welsh deep in their opponents 22, they chose to go for a scrum, which had been relatively dominant. Scrum half Adam Nixon picked and drove and was just short of the try line. Number eight, Matt Williams, in a manner very similar to Howells’ try just minutes before, picked up the ball from the ruck and managed to break over the white line, and with the conversion added, London Welsh had a full time score of 34-10.

This proved to be a frustrating game for Welsh who looked to cut loose on several occasions but struggled to put a determined Farnham side to bed. Despite the weather, the fact also remained that Farnham were a good outfit who certainly looked a long distance better than their lowly league position of second bottom. Farnham were well drilled and put some great play together; there have been very few sides in the last 5 years that have held Welsh to zero for a quarter of the match and indeed to be very much in the game at half time. It goes without saying that no side in this league should take Farnham lightly and we suspect that they will pull away from the bottom of the league as the season progresses.

The above said this was ultimately a comfortable win for Welsh and with a number of key players remaining on the sidelines. The bonus point win made it 10 from 10 this season for Welsh, 8 of those wins coming with the bonus point.

There were stand out performances from Rohan Pixley (almost inevitably), Will Ponty, Jack Anderson and the in form Sion Cowdy who ran hard all day. However, it was Jacob Butler at 15 that took the Player of the Match honours. Jacob (son of Father Eddie) was calm and controlled all day at the back and proved clinical from the boot and with ball in hand. Paul Sampson was very impressed by the young outside back and his excellent try will be the take away memory for many from the day. The fact that Jacob has only made 3 previous league Appearances this season stands as testimony to the quality and strength in depth through the Performance Squad.

Welsh now look to nurse further players back to fitness as an away trip to mid table Guildford RFC is up next in Round 12. 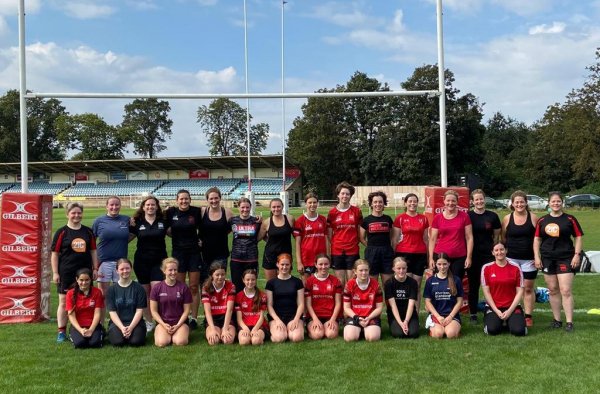 March preview: London Welsh head to Cobham for Round 17

England v Wales is back at odp!