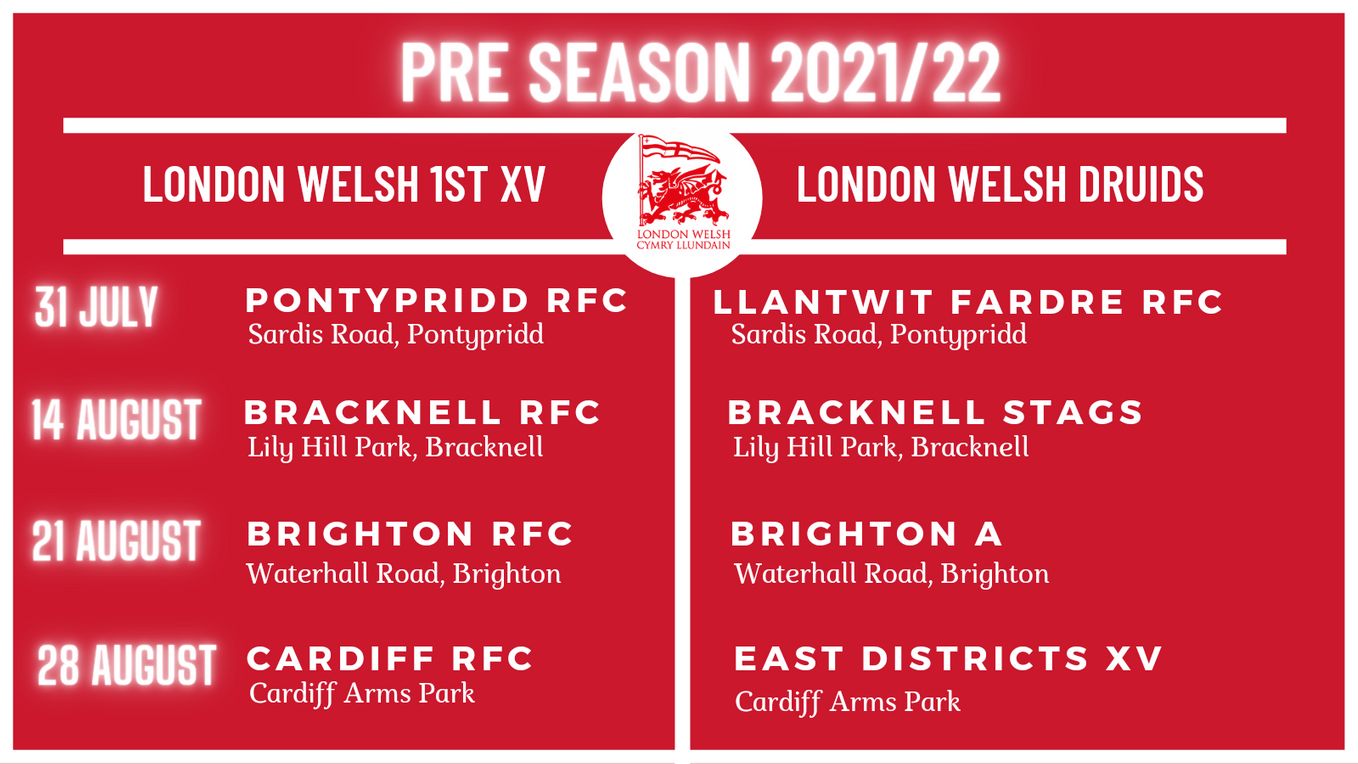 An action packed fixture list makes for an incredible line up for Pre Season as we reignite old bonds! London Welsh Are Coming!

Well….by the time July reaches Old Deer Park it will have been 18 months since the rampant dragon took to the field in the famous badge of London Welsh RFC; something seen only in war time since 1885 as the global pandemic has hit our wonderful game.

But as they say, all good things come to those who wait!

The Board of Directors has been preparing for the 2021/22 Season since the beginning of the pandemic and as we now finally enter Season 4 of project reset (the 4th year in the clubs well publicised 5 year plan), Director of Rugby Cai Griffiths has his mind focused on one thing: a 4th consecutive promotion!

With the above in mind and with the squad returning for an intense 10 week Pre-Season (split into 3 blocks) on 15th June: we are delighted to reveal our Pre Season fixture list (it is a cracker!).

The list sees the return of some classic derby matches with some old friends/cousins in Wales , fixtures that still to this day encapsulate all of the heritage and intrigue that our wonderful game has to offer and present some of the biggest historic names in World Club Rugby. We also see some new names appear that will provide a good test for the 2021/22 squad as we look to continue the climb back through the league structure.

Well, they don’t come much bigger than this! We open the season as we mean to go on, with one of the best teams that the Welsh Premiership has to offer: Pontypridd RFC is one of the most recognised names in the sport, 5 times winners of the Welsh Premiership last topping the table in 2014/15 and narrowly missing out in the last completed season of 2018/19 finishing 3rd behind Merthyr RFC and Cardiff RFC.

Our trip to Sardis Road also sees a reunion with the now Pontypridd RFC Director of Rugby, Justin Burnell. Justin was Head Coach at London Welsh for the 2013/14 and 2014/15 Seasons, famously guiding us back to the Premiership in 2014 via a two leg victory over Bristol in the Championship Playoffs. Justin has a special place in London Welsh hearts and the bond is strong both ways, Justin guested on the London Welsh RFC Podcast this year and recanted very fond memories of his time at Old Deer Park and his affection for the club.

This is a truly mammoth fixture that comes straight from the rugby club hall of fame! It provides DoR Cai Griffiths with the chance to test his young and talented squad against real quality as the step up in leagues year on year (since 2017) pushes the evolution of the London Welsh squad to the maximum. London Welsh last ran out against Ponty in a pres season friendly at Sardis Road on 23 August 204; Welsh taking the match that day 40-12 with Seb Stegmann, Nic Reynolds, Rhys Crane, Tom May and Olly Barkley all on the score sheet as Sonny Parker returned to Pontypridd.

The day will also see the Druids 2nd XV take on Llantwit Fardre RFC of Welsh National League 2. Llantwit sport a proud history dating back to 1946 and a feeder club in the Cardiff Blues region and Pontypridd (producing Neil Jenkins who needs no introduction here). This will be a great curtain raiser and a test for the Druids players who look to make their impression on the coaching team.

Fixture 2 sees a level pyramid game against South West 1 side Bracknell RFC. The club has a proud history reaching their highest point in the English league structure in the early 2000’s with a stint in National 1 where the met London Welsh! Welsh triumphed at Old Deer Park 44-20 on 20/10/01 with 29 Points from Andy Lee and further tries by Matt Vines and James Strong. The return fixture at Lily Hill was a closer affair with Welsh just pipping the opposition 24-22. Most recently, the club competed in 2019/20 in the national leagues (South West Premiership), being unlucky to have been relegated by the RFU pandemic enforced points system; they will play at the same level as London Welsh in 2021/22 but in the Western conference.

Served up for match 3 we have a trip to the coast and a day by the sea as we take on Brighton RFC. Brighton is one of the oldest clubs in the country having formed in 1868. They have strong links with Brighton College (a renowned rugby school) and won promotion in the 2018/19 season to their current National League position in the London &South East Premier League.

This will be a strong test for the Performance Squad against league opposition that we would hope to be joining next season. It seems almost impossible to state, given the age of both clubs and the relative proximity, but this will be the first meeting of the clubs at 1st XV Senior level.

The Druids will also take on Brighton A Development team.

We finish Pre Season with what can only be described as supporters club extravaganza as we head to the Welsh Capital to play Cardiff. There are few bigger names in World Rugby and indeed few fixtures with such heritage and meaning. Founded in 1876, Cardiff RFC is now the Welsh Premiership and development arm of the Cardiff Blues Regional Side (following regionalisation in 2003).

Since our project reset in 2017 the old and very close links with Cardiff as a region have been rekindled with the forming of a strategic partnership in 2020 that will see Welsh exiles in the Cardiff system train and continue their development through London Welsh. Last season two of the rising stars of the welsh region (Gwilym Bradley and Theo Bevacqua) joined Welsh for pre-season and with a view to playing a part in the Performance Squad. The pandemic of course meant that both of these age grade internationals are yet to wear a London Welsh jersey, but a thorough pre season with our performance squad has now seen both players make their senior Cardiff Blues debut in the Pro 14 and friendly fixtures; indeed they may well feature in this fixture in August.

The first meeting of the clubs came at CAP on 30 December 1885, Cardiff winning 2 scores to 1. The first ‘home’ game for Welsh came on 23 February 1907 at the County Ground, Leyton, Welsh losing by 4 scores and two goals (in old money). One of the most famous fixtures came on the morning of 15 January 1972 (the morning of the England v Wales game at Twickenham) where a crowd of over 10,000 at Old Deer Park were treated to a London Welsh win 8-7, tries from Jim Shanklin and Dai Llewellyn.

The last meeting of the clubs was a 64-15 win for Cardiff in February 1996 at Old Deer Park; although games did take place against the Cardiff Blues Premiership Select XV in the B&I Cup in the 2015/16 season (Welsh winning 33-29 at ODP on 21/11/15 and 32-30 at CAP in January 2016 – tries from James Lewis, Guy Armitage, Kieran Murphy and Darren Walters -Olly Barkley adding the extras). This was the year that Welsh won the B&I Cup.

Gruff Rees, Cardiff Rugby Academy Manager said of the fixture: ‘ We are delighted at the Cardiff Blues, especially after such a tumultuous period of non rugby activity for our RFC players. The game can hopefully kickstart what is an exciting period for us and against historic opponents. Indeed, it has been great to see both Gwilym Bradley and Theo Bevacqua (both of whom could feature in this fixture) make their senior debuts after spending pre season at Old Deer Park last year. It should be a great occasion and we look forward to welcoming our friends from London. ‘

This game will also see Head Backs Coach Steve Shingler returning to his old club in a coaching role. The Druids will meet in a curtain raiser against an invitational side made up of the best players from National League Wales; the Eastern divisions.

Director of Rugby of Cai Griffiths spoke of the pre-season programme as a whole: ‘ We cannot wait to get started again. The 5 year plan following the club’s project reset has been so important to everyone involved with the community around and within the club, to have had that put on hold for over a year has been so frustrating. We have a very good and established squad of talent in the performance group and over the last year we have also made some eye catching additions that I look forward to releasing in the coming weeks. The 4 games over pre season will be a real test of the squad, with a mix of challenges from across the rugby divisions, the common theme being quality and a strength of opposition. The two trips to Wales with be a real challenge but also a great opportunity for the talent that we have to put their hands up and show what they can do. The ambition in this player group is limitless and that is matched only by the aspirations of the coaching team. It is a testimony to the size and renown of our great club that we an put together such a impressive line up for pre-season and it will be fantastic to meet up with Justin (Burnell) who I know well, and indeed the management team at the Blues Academy led by Gruff. The links that we have with the region and Premiership clubs in Wales is strong and one continues to grow as we push on in our own journey.’

Well there we are – we are delighted after such a torrid time in the global pandemic to present a comprehensive, challenging and exciting pre season schedule. We can only hope that we are fortunate enough to welcome supporters from both sides through the gates to be part of what should be 4 wonderful rugby occasions!

Details will follow from the London Welsh Supporters Club as to match day travel, supporters club transport and buses and surrounding events. We will keep members, supporters and our community fully updated as pre season kicks off and do keep an eye out as we release more information in the coming weeks as to the squad for 2021/22 and those who will be joining us (you will not be disappointed!). 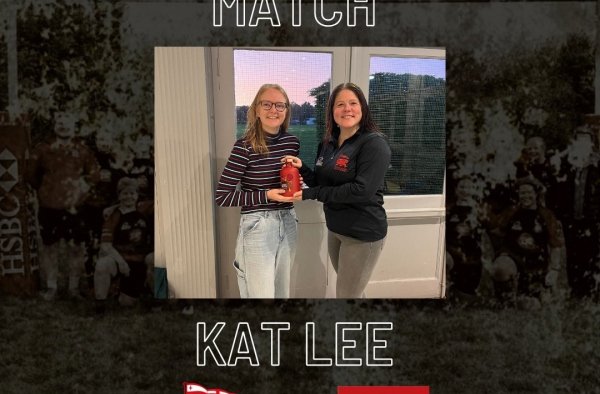 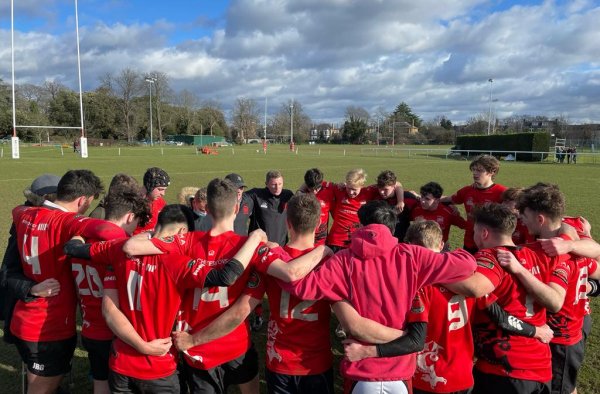